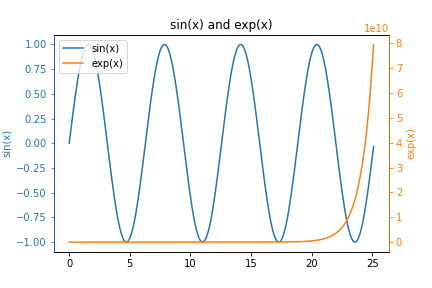 We are going to build our y-y plot with Python and Matplotlib. Matplotlib is a popular plotting library for Python. Before we can build the plot, Python needs to be installed on our computer. See this post to review how to install Python. I recommend installing the Anaconda distribution of Python, rather than installing Python from Python.org.

Two other libraries we will use to build the plot are NumPy and Jupyter.

Type the command below into the Anaconda Prompt to install Matplotlib, NumPy, and Jupyter.

The same three libraries can also be installed using a terminal and pip:

We'll use a Jupyter notebook to build the y-y plot. A .py file could be used as well. The Python code is the same (except for the %matplotlib inline command). I like using Jupyter notebooks to build plots because of the quick feedback, in-line plotting, and ability to easily see which plot corresponds to a block of code.

A new Jupyter notebook can be launched from the Anaconda Prompt or a terminal with the command:

At the top of our Jupyter notebook, we'll include a section for imports. These import lines are necessary so that we can use Matplotlib and NumPy functions later in the script. Matplotlib will be used to build the plot. We will also use NumPy, a Python library for dealing with arrays to create our data.

The versions of Python, NumPy, and Matplotlib can be printed out using the following code:

We need data to include in our y-y plot. We'll start out by creating two NumPy arrays, one array for the sine function and one array for the exp function ($e^x$). These functions are good examples to use in a y-y plot because the range of values sin(x) and exp(x) output is very different.

Let's try and plot both of these functions. Each function can be plotted with Matplotlib's ax.plot() method. The two code cells below show a plot for each function in a separate figure window.

Above, we see a plot of the sine function. Note the y-values in the plot are all between -1 and 1. We can build a line plot of the exp function using very similar code.

A figure with two subplots¶

One way we could view both functions at the same time is to use subplots. The code below builds a figure with two subplots, one function in each subplot.

Now let's combine these two plots on the same set of axes, but with two different y-axes. The y-axis on the left will correspond to the sine function. The y-axis on the right will correspond to the exp function. The key line of code is ax2 = ax1.twinx(). This line of code creates a new axes object ax2 that shares the same x-axis with ax1. The .twinx() method is what allows us to create a y-y plot.

Next, we'll color the axes and the axis labels to correspond to the line on the plot that it corresponds to.

Note that in the code below, we don't set the spines color to blue on ax1 even though ax1 contains the blue line. This is because after we plot on ax1, the spines on ax2 "overlap" the spines on ax1. There is no overlap of tick_params, so those can be set on ax1.

Next, we'll add a legend to our plot.

Add a legend to the y-y plot¶

The problem is that if we call ax.legend(['sin','exp']) we only end up with a legend with one entry. To get around this problem, we apply the legend to the entire figure object fig. The line fig.legend(['sin(x)','exp(x)'] creates the legend. bbox_to_anchor=(0.9, 0.8)) is added as a keyword argument to ensure the legend is within the space of the plot and not way off to the side. This is because we are applying the legend relative to the figure window and not relative to the axes.

We see a plot with two lines, two different color y-axes, and a legend. One more thing we can try is to create the legend in an alternate way.

Alternative way to add a legend to a y-y plot¶

An alternative way to add a legend to a y-y plot is to specify exactly which line objects should go into the legend.

Usually, when the ax.plot() method is called, the output of it is not saved to a variable. But if we save the output of the ax.plot() method, we can feed it into our ax1.legend() call in order to specify which lines should be included in the legend. The key line in the code below is lines = line1 + line2. Then we use the lines object when we call ax1.legend(). The code below creates a y-y plot with a legend in an alternate way.

We see a y-y plot with two colored y-axes and a legend in the upper-left corner.

In this post, we constructed a y-y plot with Matplotlib and Python. y-y plots are useful when you have two sets of data that are in different scales. Matplotlib's ax2 = ax1.twinx() method was used to create our y-y plots. We customized the plots with colored y-axes and included a legend on the plots in two different ways.