Streamlit is a web app-building framework for Python. Streamlit is a way to create mostly simple single-page web apps that are easy to deploy. Streamlit is useful for engineers and data scientists who have some app functionality, like a plot that dynamically changes based on user interaction, but don't want to build out a full website using a web framework like Django or Flask.

In this post, we will create a Streamlit app that displays a Bokeh plot and deploy it online with Heroku.

A link to the Streamlit docs is below:

Streamlit builds web-apps from a single Python file. Only a couple additional lines of code are needed to turn a Python .py file into a web-app using Streamlit.

You can confirm your installation by opening up the Python REPL and typing the commands below (note the >>> prompt is shown to indicate the Python REPL, not characters for the user to enter).

Running Streamlit for the First Time

You can run a demo app that comes with the Streamlit package by running the following command into a terminal. Note the (streamlit) virtual environment (with Streamlit installed into it) must be active for the command to work.

This command starts a demo Streamlit app. Open a web browser and enter the URL shown in your terminal. The running app will look something like the screenshot below. 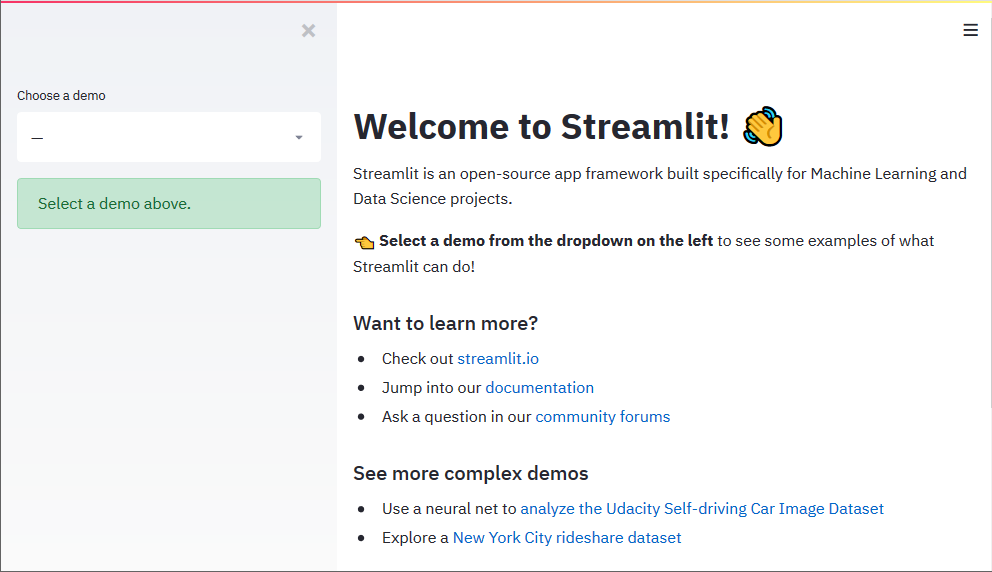 If you select the Plotting Demo from the menu on the left-hand side, you'll see an animated line graph of random numbers. 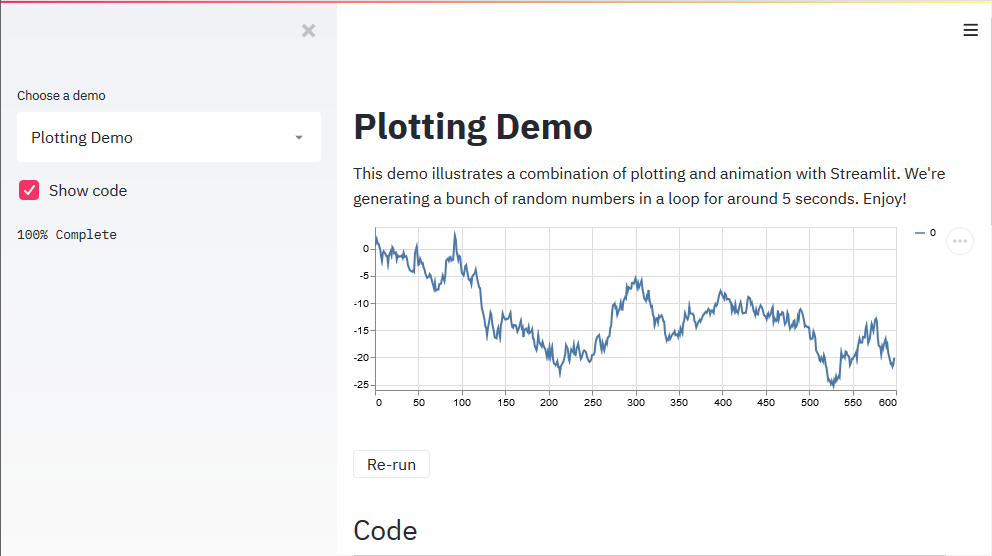 Type [Ctrl]+[c] into the terminal stop the Streamlit server.

Now that we have a feel for some of the things Streamlit can do, let's build a simple Steamlit App.

Next, let's build our own simple Streamlit app. Our app will ask a user for a number and a name. The app will add 1 to the number and tell the user "Hello" based on their name.

The following code was entered into a file called simple_streamlit_app.py

After the file is saved, simple_streamlit_app.py can be run as a Streamlit app from the command line (again, make sure you are in the virtual environment where Streamlit is installed):

Browse to the URL shown in the terminal. The resulting Streamlit app looks something like the screenshot below. 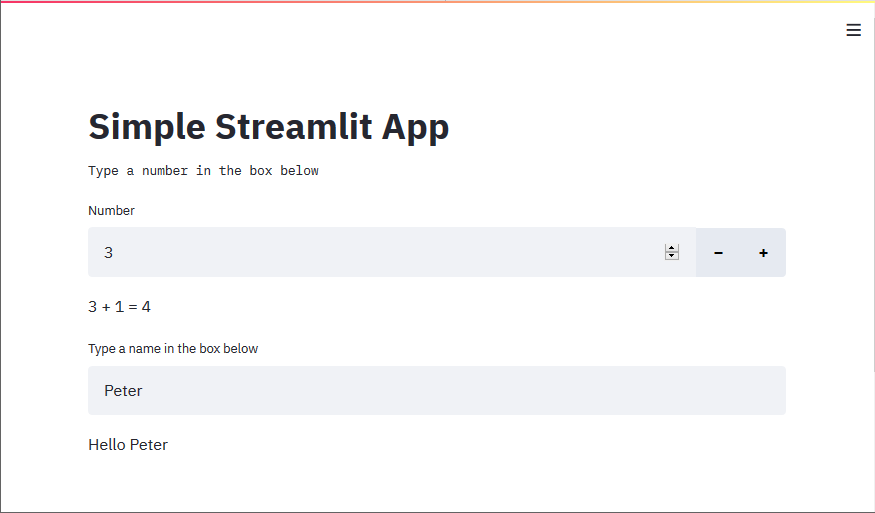 Type a couple numbers and try out a couple names. Pretty simple right? To shut down the app, type [Ctrl]+[c] into the terminal.

Now that we have created a simple Streamlit app, let's build upon the experience and create a useful app. Our app will build a Mohr's Circle based on user input.

We will build Mohr's Circle using a plotting library called Bokeh. Bokeh is similar to other Python plotting packages like Matplotlib. The difference is that Bokeh is designed to show plots in browsers and on webpages. This functionality is perfect for our Streamlit app that runs in a web browser.

Let's create two .py files to build our app. The first file, user_funcs.py contains a couple functions needed to calculate the parameters of Mohr's Circle. The Python code below contains the functions we need.

The second Python file, called streamlit_app_bokeh.py contains the code to build the plot using Bokeh and build the app using Streamlit. Note the last line of code is st.bokeh_chart(p). This line is the "magic sauce" that turns our Bokeh plot into a Streamlit app. The line is a substitute for the command to show a plot in a regular Bokeh application.

Before we can run our Mohr's Circle Streamlit app, we need to install the packages we imported in the two .py files. The packages we need are Bokeh and NumPy. Both of these packages can be installed with conda or pip on the command line. Make sure you are in the (streamlit) virtual environment when you run the install command.

Now we can run our Mohr's Circle App locally by typing the command below into the terminal.

The resulting app will look something like the screenshot below: 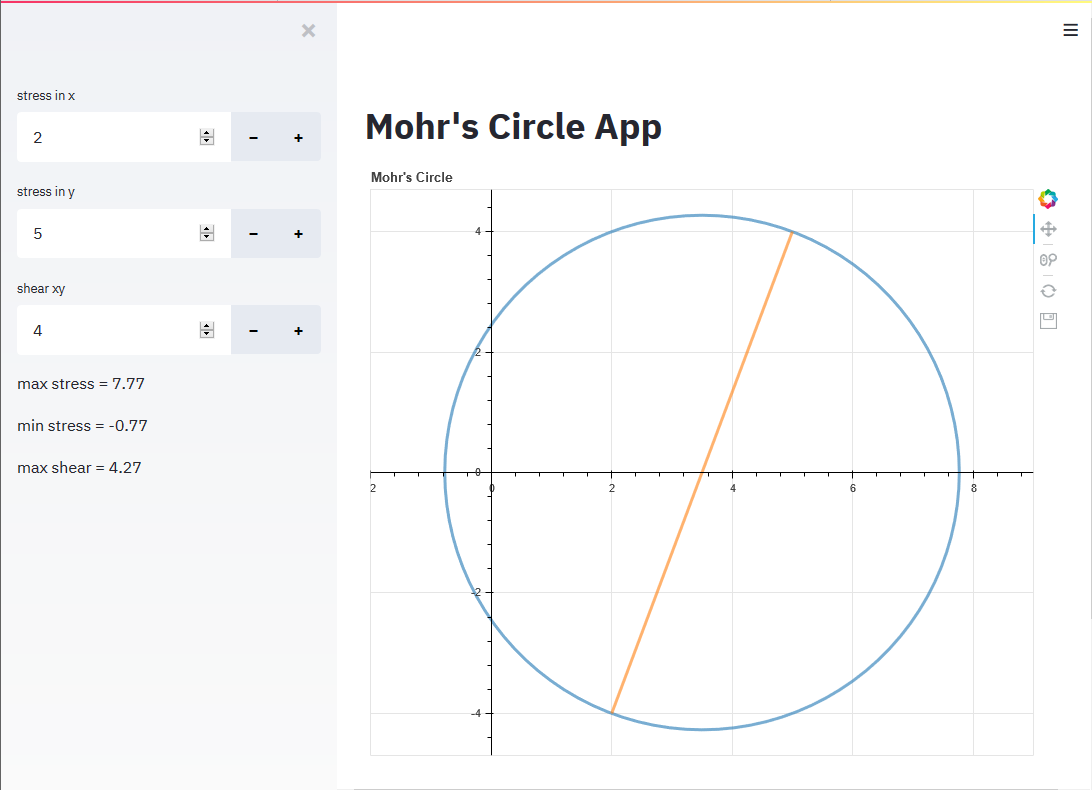 Now that the app is running, let's save all the files on GitHub. We'll need the files saved on GitHub for the next couple steps.

Save code on GitHub.com

Create a repo on Github, and then use the commands below to commit the code locally and push the code up to GitHub.com. Make sure to change <UserName> to your GitHub username and change <commit message> to your specific commit message.

Our Mohr's Circle Streamlit app runs locally, but if we want to share the app with friends, we need to deploy it over the internet. One way to deploy a Streamlit app is with a web service called Heroku.

Heroku is a cloud platform for deploying apps on the internet. We can deploy our Steamlit app on Heroku with a couple steps. 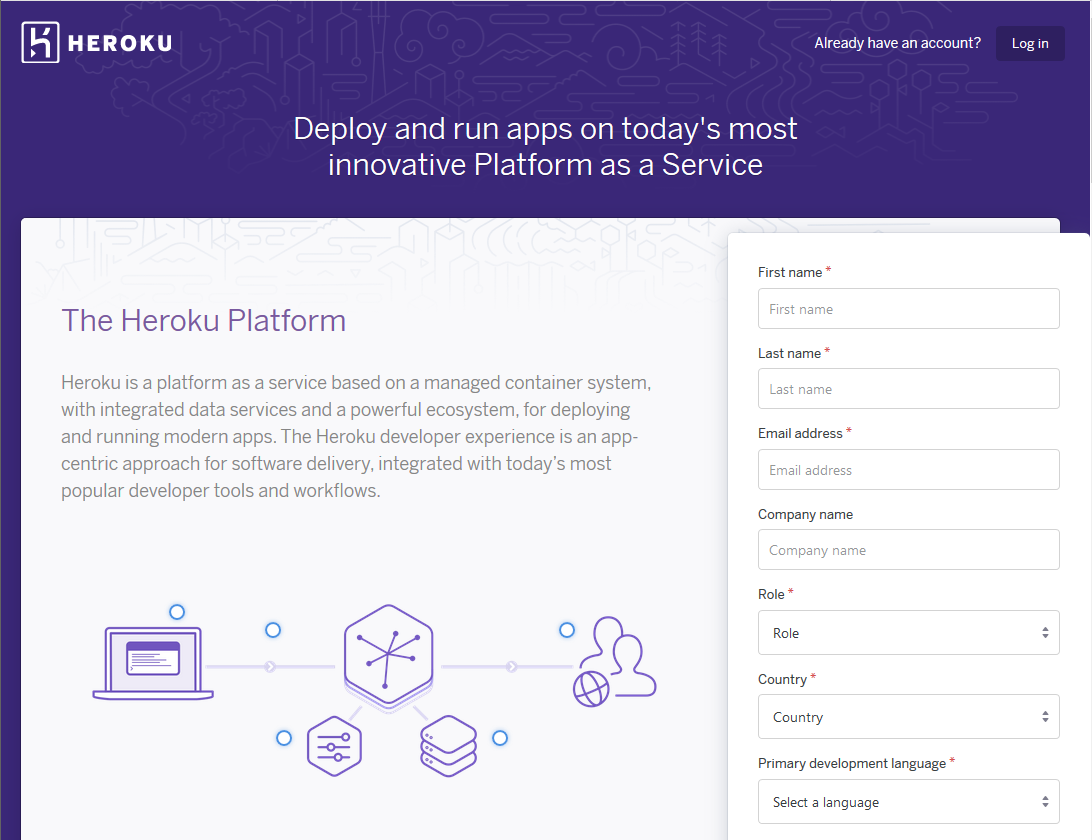 One of the easiest ways to deploy a web-app to Heroku is to use the Heroku CLI (Command Line Interface).

Use Windows Subsystem for Linux (WSL) to install the Heroku CLI 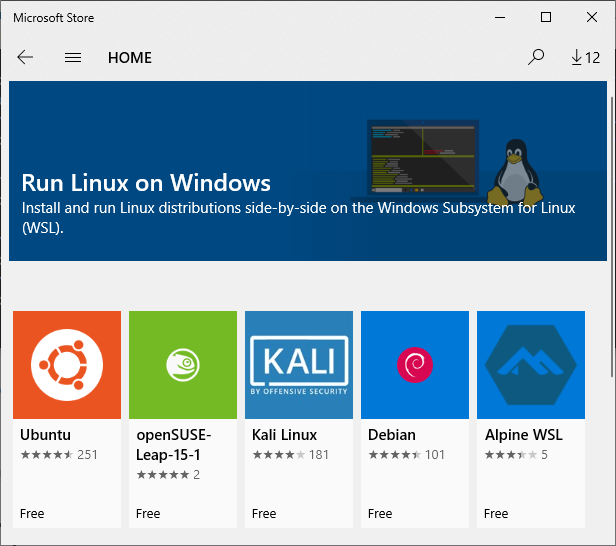 If you are using Windows 10, install Windows Subsystem for Linux (WSL) from the Windows Store. I installed the Ubuntu distribution.

Using the start menu, and open the WSL prompt. Type the commands below to update the system and install the Heroku CLI.

These commands install the Heroku CLI. You can test the installation with the command below.

If the Heroku CLI is installed, output should look similar to the screen capture below.

Pull down the code from GitHub

Since we saved our code on GitHub.com, we can use git to pull the code down into the WSL environment. Remember to replace <UserName> with your GitHub username.

Now that we have the code for our app, we need to create the same virtual environment in WSL as we had before when we got our app to run locally.

Create a virtual environment, install packages and save a requirements.txt file

Next, within Windows Subsystem for Linux, create a new virtual environment and install Streamlit, Bokeh and NumPy into it. I have Anaconda installed in my WSL environment, so I used conda to install the Python packages. Alternatively, you could use Python's venv module and pip instead. After the packages are installed, you can use pip to write a requirements.txt file. Heroku needs the requirements.txt file in order for the Streamlit app to work.

Now we should be able to run the streamlit app from the WSL prompt.

Test and make sure the streamlit app runs

Next, within WSL, let's test and see that the Streamlit app still works. Ensure you are in the virtual environment created above when the command is run.

You can browse to the URL listed and test the app by typing in a couple different stresses and see how the plot changes.

Create a Procfile and a setup.sh file

Before we can deploy the app on Heroku, a couple more files are required:

In the Procfile (the file name is Procfile with a capital P and no file extension) add the text:

In setup.sh add the text:

Now the main project directory should have the following files present. The LICENSE and README.md files are optional, but I include these two files in my GitHub repos as a general practice.

Commit all the files and push to GitHub.

Now we are finally ready to deploy on Heroku.

Push the project up to Heroku

Log into Heroku with the Heroku CLI, create the Heroku project and git push to Heroku:

That's it! The Streamlit app should now be running on Heroku.

View the Streamlit App live on the web 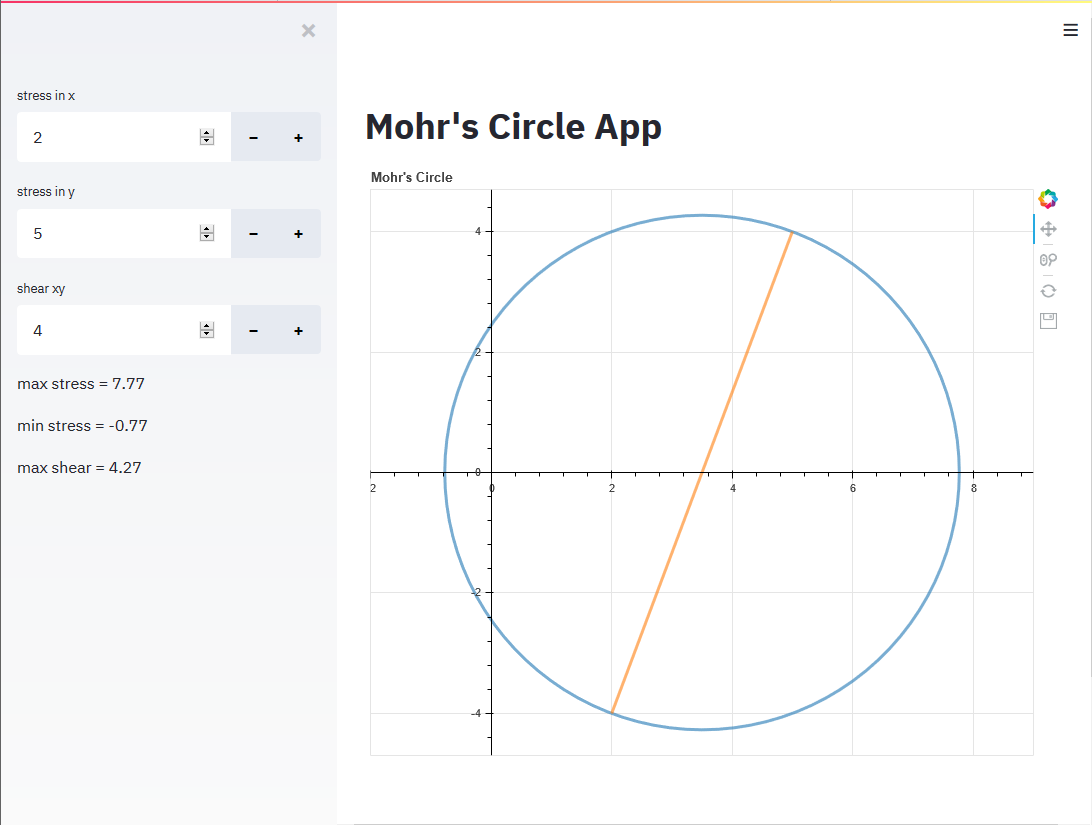 The Streamlit app opens on a phone too. 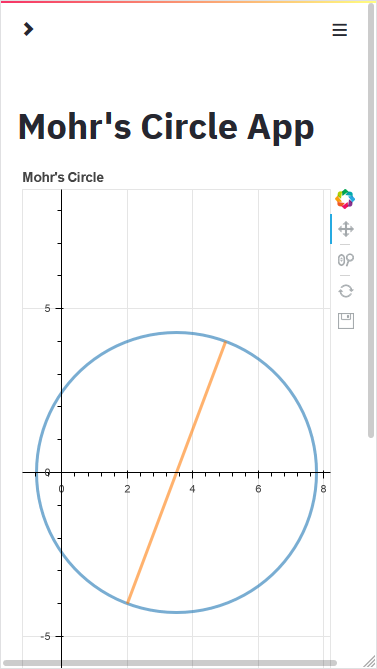 In this post, we created a web app with Streamlit and Bokeh. We ran the Streamlit app locally and then deployed it on the internet using Heroku. Streamlit makes it pretty easy to turn a Python script into a functional web app deployed on the internet.