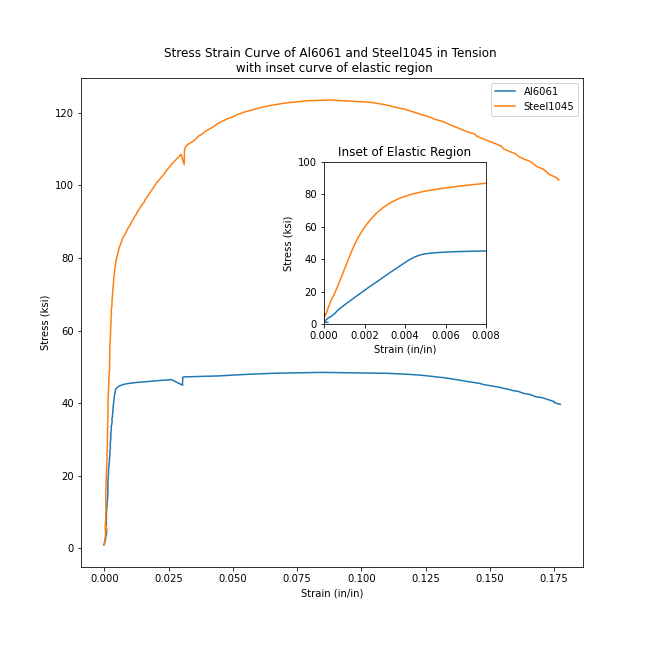 The plot built in the previous post included two lines, axes labels, a title, and legend. The data in the plot came from two .xls excel files and was from a tensile test of two metal samples. We are going to build upon that plot by adding an inset curve to it.

In order to build an inset curve with Matplotlib, you'll need to have a couple of things in place:

Matplotlib, NumPy, and Pandas - We'll build our inset curve using a Python plotting library called Matplotlib. Matplotlib is one of the most popular Python plotting libraries. If you installed Anaconda, Matplotlib is already installed. If you installed Python from somewhere else, you'll need to install Matplotlib. NumPy is a Python library for numeric computation. We'll use NumPy to make a few calculations. Pandas, a Python library for working with tabular data, will help us bring the data into our Python program.

You can install Matplotlib, NumPy, and Pandas with the Anaconda Prompt using the commands below:

Alternatively, you can use a terminal and the Python package manager pip to install Matplotlib, NumPy, and Pandas.

Data - The data we are going to plot is from two .xls data files. You can download these files using the links below:

Move these .xls data files into the same folder on your computer as your Jupyter notebook or .py file that contains your code.

Once these pre-requisites are in place, it's time to start building our inset curve!

Matplotlib's object-oriented interface allows us to access individual components of the plot, like axes, and set specific attributes on these components.

To build our plot with an inset curve, first, we need to import a couple of packages: NumPy, Pandas, and Matplotlib. These three Python packages have common import aliases: np, pd, and plt. The line %matplotlib inline is a Jupyter notebook magic command that results in plots produced within the same Jupyter notebook (as opposed to the plot popping out in a new window). If you are coding your inset curve in a .py file, leave %matplotlib inline out, as it is not valid Python code.

The next few lines of code are not required, but can be helpful to others who might use our code again.

The lines of code below print out to version of Python and the versions of the packages we imported above.

Ensure the two .xls data files are in the same folder as our code¶

The two external files that contain the data we are going to plot are linked below:

If you are following along and building an inset curve yourself, make sure to download the .xls data files and place these data files in the same directory as your Jupyter notebook or Python script.

A convenient Jupyter notebook magic command, %ls, lists the contents of the current directory (the directory where the notebook is saved). Make sure you can see the two .xls data files in this directory. The %ls command is not valid Python code, so if you are building your plot in a .py file, make sure to leave %ls out.

We can see the two data files aluminum6061.xls and steel1045.xls in the same folder as our Jupyter notebook stress_strain_curve_with_inset_elastic_region.ipynb

Next, we need to bring in the data from the two external .xls files into variables in our script.

Read the data with Pandas¶

Next, we'll bring the two .xls data files into our Python script using Panda's pd.read_excel() function. The result is two Pandas data frames called steel_df and al_df which contain the data from our two .xls files.

We can use Panda's df.head() method to view the first five rows of each dataframe.

We see a couple of columns in each data frame. The columns we are interested in are below:

We will use these columns from the data frames in the following ways:

Now that we have the data in 6 panda's series, we can build a simple plot.

We'll use Matplotlib's object-oriented interface to create two objects, a figure object called fig and an axes object ax1. Then we can run the .plot() method on our ax1 object and pass in two sets of series. The command plt.show() shows the plot.

We see a plot (a stress-strain curve) with two lines. Right now, the plot looks pretty bare. We can spruce it up a bit with axis labels, a title, and a legend.

Add axis labels, a title, and a legend¶

We see a plot with two lines, axis labels, a title, and a legend. Now, onto adding the inset curve!

Next, let's add our inset curve. Our inset curve is a zoomed-in view of the linear elastic region (the far left, almost vertical portion of the stress-strain curves). To create a plot on top of another plot (our inset curve), we'll use Matplotlib's fig.add_axes([ ]) method. This method outputs a new axis object ax2. ax2 will be the axes that we plot the inset curve on. We can set attributes like .set_xlabel() on our ax2 object to add labels to the axis, a title, and limit the x and y-axis so we only show the left-most portion of the curve.

In this post, we plotted a stress-strain curve with Python and Matplotlib then added an inset curve on top of our main plot. We used Matplotlib's object-oriented interface to create the inset curve.

The code to remember if you want to add an inset curve on top of a Matplotlib plot is below:

Want to learn about building more plots with Matplotlib? Check out my book Problem Solving with Python on Amazon (Affiliate Link):