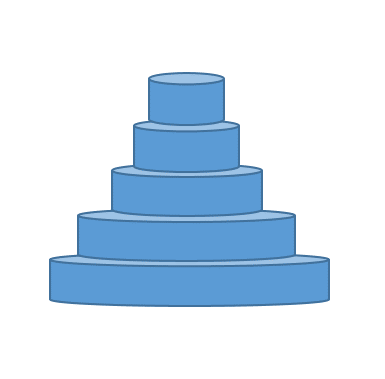 In this post, we will complete a problem that might come up in a Strength of Materials class. We'll estimate the deflection of a truncated cone given an applied load using Python.

Below is an engineering mechanics problem that can be solved in Python. Follow along this post to see how to solve the problem with code.

A solid truncated cone is subjected to an axial force $P$ as shown below. 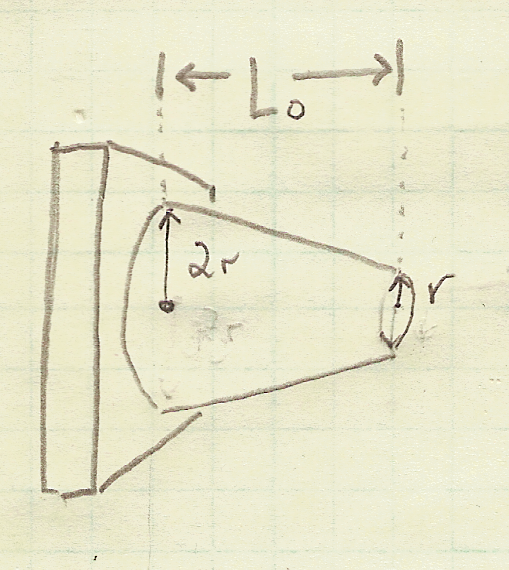 When load $P$ is applied to the cone, the exact elongation, $\delta$ is:

This problem can be completed generally, but for this solution, we are going to assume the following:

We are going to use Python to code the solution to this problem. If you don't already have Python installed on your computer, I recommend installing the Anaconda distribution of Python. See this post to learn how to install Anaconda on your computer.

Alternatively, instead of using a Jupyter notebook, you could code your solution in a .py file.

Calculate the exact value of the deflection of the truncated cone¶

The equation and assumed values are below.

To code this solution in Python, first we need to import the math module. From the math module we will use math.pi as our value for $\pi$. We can print our calculated d_exact using a Python f-string. Python f-strings allow us to put variables on the inside of print statements. Variables inside Python f-strings need to be surrounded by curly braces { }. Make sure to pre-pend the f-string with the letter "f".

Model a truncated cone as a series of disks¶

Next we'll see how the approximations of the elongation of the cone compare to the exact elongation d_exact calculated above. We'll calculate the approximate elongation by dividing the cone into separate "disks". Below is a picture of a children's toy to illustrate the concept of modeling a truncated cone as a set of stacked disks. In the picture below, the truncated cone is modeled as 5 disks stacked on top of each other. 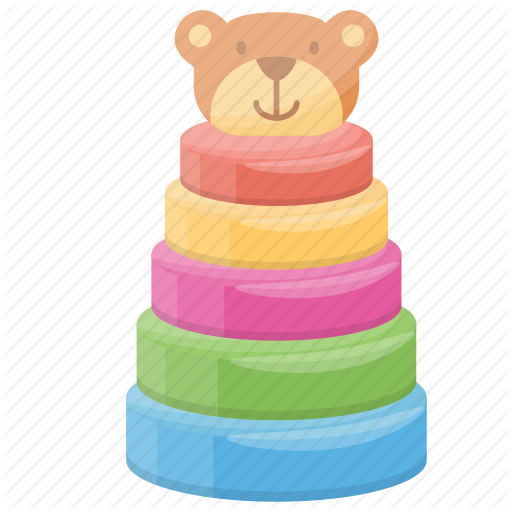 The elongation $\delta$ of each "disk" is equal to:

$\delta$ = deformation, or change in thickness of the disk

$L$ = original length or thickness of the disk

$A$ = cross-sectional area of the disk 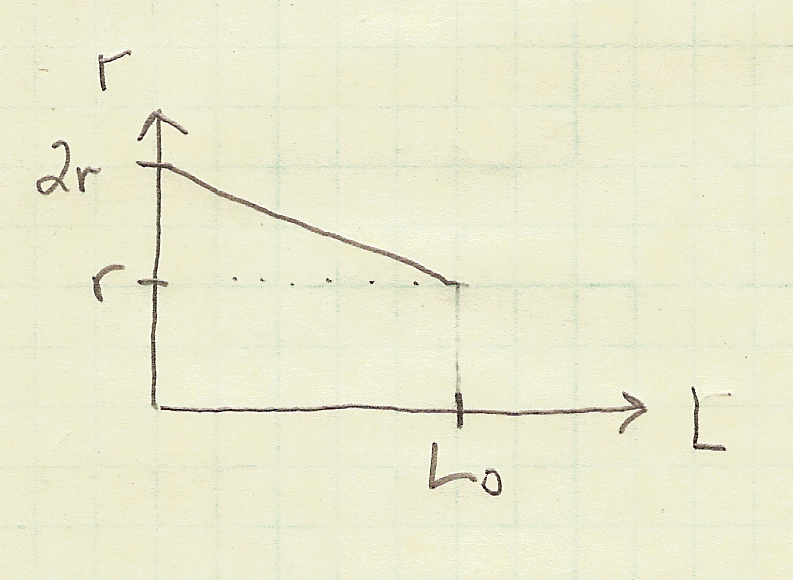 OK. Let's make our first approximation for the deflection of the truncated cone.

Approximate the truncated cone as one disk¶

If the truncated cone is modeled as a single disk (something that kind of looks like a can of soup), the radius of that single disk should be the average of the minor radius $r = 5 \ mm$ and the major radius $2r = 10 \ mm$. The plot below shows this approximation. Note how the upper surface of the cone (the line on the plot) has been approximated as a single horizontal line at a value of $r = 7.5 \ mm$ (the average of $5$ and $10$). 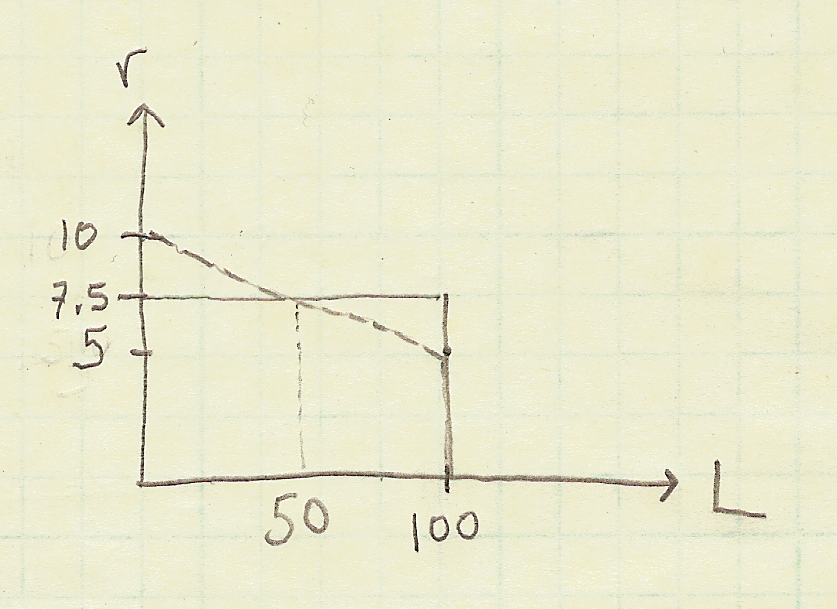 We can calculate the the elongation of this single cylinder (single disk) which has a radius of $r = 7.5$ using the standard equation for elongation in engineering mechanics.

$\delta_1$ = deformation, or change in thickness of the one disk

Let's code this approximation of the elongation (modeling the truncated cone as a single thick disk) in Python.

We can more closely approximate the deformation of our truncated cone by dividing the cone into more numerous and successively thinner disks. The plot below shows the progression of using two disks, then three disks, then four disks.

Note that as the number of disks increases, the thickness of each disk also increases.

Find the thickness of each disk¶

The thickness of each disk $L_n$ can be calculated by taking the thickness (or Length) of the entire truncated cone and dividing it by the number of disks.

$L_n$ = thickness of each disk

$n$ = number of disks the truncated cone is approximated by

Find the L value for each disk¶

$L_n$ = thickness of each disk

So what we need is an equation that spits out radius $r$ given length $L$.

We can write the equation with the help of a plot. The plot below shows how radius $r$ changes based on length $L$. The relationship is a simple line that we can approximate using the form $y = mx+b$. Where $y = r$, $m = slope$, and $b = y-intercept$. The hand-drawn plot below shows the equation for our assumed values.

Now let's use our formula for disk radius $r$ and approximate the elongation of the truncated cone using two disks ($n=2$).

To make our calculation work for $n$ disks, we'll use a for loop. We want to start our loop at i=1 and end our loop at i=n. We can do this with Python's range() function. Note that we set for i in range(1,n+1): (start at 1 end at n) because Python counting starts at zero and ends at n-1.

The deflection calculated using the Python for loop is the same as the deflection when we hard coded in each disk. Now we need to add these deflections together to calculate the total estimated deflection.

We can add all of the individual disk deflections together into one variable called d_t. We'll use Python's += operator to add each disk's deflection to d_t each time we go through the for loop. The code below calculates the total deflection.

Now that the code works for 2 disks, we can easily approximate the deflection using a 6 disk, a 12 disk and a 60 disk approximation.

The code below corresponds to a 6 disk approximation. Note how n=6 and how the variable d_6 is used to store the total deflection instead of d_t. We'll use this d_6 value later, so we want to set it to a unique variable name.

The same code can be used to approximate the deflection using 12 disks. This time we change n=12 and change d_6 to d_12. I also commented out some of the print statements so that the output wouldn't be so long.

One more approximation to make, 60 disks. Let's comment out all of the print statements except for the final one. Remember to change n=60 and use the variable d_60.

That's the closest approximation of them all. How close was each approximation? Let's quantify that using percent error.

To calculate the percent error we'll use: