This is the first part of a multi-part series on how I built this site. In this first post, we'll review the development environments, Python, virtual environments, installing Python packages and set up git.

Set up the development environment

An advantage of using the Anaconda distribution of Python (compared to "regular" Python) is that each of the four computers will have the same stable version of Python and I can keep the same Python packages installed on each machine using the conda package manager.

Download the latest Anaconda distribution of Python release at:

Time for some fun! Installing Pelican. Pelican is a Python package that creates static websites. Static sites are websites that only have html, css, and javascript. A static site is not connected to a database, and there is no code run on the server side. The server just serves static files (html, css, javascript) to the client when the client requests them. To install Pelican, we need to install pip first. On my Linux and MacOS machines, the command line tool git is already installed. If using Windows 10, git may not be available. To keep the development environments the same when using Windows 10, you may also need conda to install git. The commands to install both pip and git are below.

Once pip is installed, we can install pelican and markdown. These are two of the core packages we need to build the website. fabric3 is also installed because we'll use it to build and demo the site on Windows. bs4 is the beautiful soup package. Some of the pelican plugins installed later will depend on bs4 to function properly. Note the (staticsite) virtual environment is active when the packages are installed.

Create a GitHub.com account and create a new repository

While I was making the site, it became clear that I had to keep track of version control. I would make some changes to the site on my computer at work, then come home and make more changes to the site. Carrying a USB thumb drive back and forth from work to home was hard. If I forgot the thumb drive at work, (or left it at home) and then could not edit the site. Or worse, I'd modify the site in both places and try to remember which changes were made and which machine and which was the best version. Ah!

The solution is to use git and GitHub. Git is a command-line utility that assists with version control. Using git means changes made to files on one computer can be synced with the same files on another computer. GitHub.com is where the site content and settings are remotely stored and integrates easily with git. 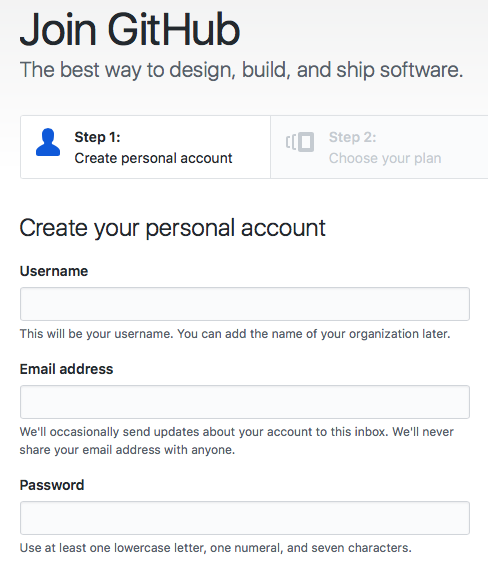 Once the GitHub.com account is set up, log in and create a new repository. Use the + button on the upper right-hand menu:

I named the new repository: staticsite and included both a README.md and a GNU General Public License v3.0. I also recommend including a .gitignore file and selecting Python among the language options. 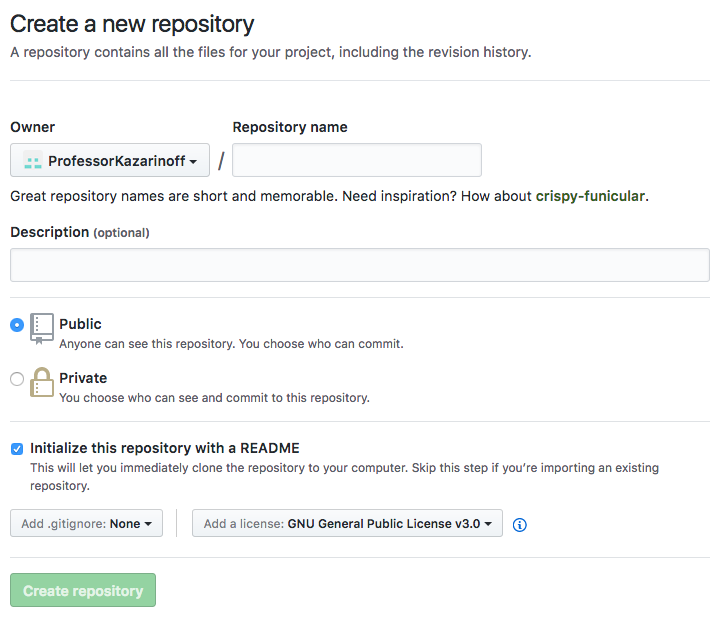 Make a directory for the site and link it to GitHub

Once the GitHub repo (short for repository, basically a folder with files on github.com) is set up, the last step to complete the development environment is to link the remote repo on GitHub.com to the local version of the site (the version of the site on a laptop or desktop).

Now, we can set up git to keep the contents of the local staticsite folder in sync with the remote repo on GitHub.com. The command git init creates the local repository. The command git remote add origin followed by the URL of our GitHub repo links a local folder on our computer to the remote repo on GitHub.com. Note the web address ends in .git. If you are following along and want to build your own static site, make sure to change username to your GitHub username and reponame to your GitHub repo name.

If we look in the local staticsite folder we now see the following two files:

The development environment is set! On to building the site!

Now each time I work on the site, I navigate to the staticsite folder on whatever computer I am using. Before any editing, I key in the command:

After the pull, the staticsite folder is up-to-date with the newest version of all the files on GitHub. Then I go about editing files, writing posts, changing settings, etc. After the edits, the last thing I do before shutting down the computer for the day is add all the changes to git with git add . (note there is a space between the add and the period .). Then I commit those changes locally with the line git commit -m "commit message" (note there are double quotes "commit message" used around the commit message), and finally push the changes up to github.com with git push origin master. Using this workflow, the version of the site up on GitHub.com is the same as the version of the site on my local computer.

These commands ensure all my computers and the GitHub.com repo contain the same version of the site.

In the next post we will use the pelican-quickstart command to get the blog off the ground, write our first post and view a demo version of the site.

Article 1 of the How I built this site series