This tutorial assumes you have Python installed on your local computer. I recommend installing the Anaconda distribution of Python Version 3.7, but you can also install Python from Python.org or the Windows Store. It is also assumed that you either have Windows Subsystem for Linux (WSL) installed or you are using MacOS or Linux itself. I recommend Ubuntu 18.04 LTS for your Linux distribution. You should also be able to bring up a terminal in your preferred operating system and be able to use some basic terminal commands such as cd to change directories, mkdir to make a new directory pwd to list the contents of a directory and cd .. to go back a directory.

Link to the Voila documentation: https://voila.readthedocs.io/en/stable/

Before we start writing any code, we need to install Voila and Jupyter. These packages can be installed using a terminal. In our example, we are also going to use NumPy and Matplotlib. The commands below show a virtual environment created with Python's built-in venv module. You could also create a virtual environment with conda if you are using the Anaconda distribution of Python. Note the command source venv/bin/activate will only work on MacOS, Linux, or WSL (Windows Subsystem for Linux). On Windows 10, use venv\Scripts\activate.bat instead.

Next, open a Jupyter notebook.

Create a Jupyter notebook with Widgets

Our Jupyter notebook needs to start with a couple of import lines. Note that we don't need to import Volia into the notebook that will become the website. We just need to install Voila into the environment that will deploy the website.

At the top of the Jupyter notebook, enter some header text into a markdown cell.

Below the markdown cell in the notebook, enter the import lines below into a code cell. These lines of code import NumPy, Matplotlib and Jupyter notebook widgets.

After the imports, enter the code below into a code cell. The code creates an interactive plot of the sine function using Jupyter notebook widgets, NumPy and Matplotlib.

Run the code cell and play with the sliders and see the plot change. The sliders change the frequency and amplitude of the sine wave.

Next, we can test our website running on our local machine. Close the Jupyter notebook and make sure the environment where Voila was installed is activate. Type the command below into a terminal to run the app locally. Notice that we don't see the code in the code cells of our Jupyter notebook; we just see the markdown cells, sliders and plot.

Great! The Voila app works locally and we can move the sliders and see the plot change, just like when we ran the code cell in the Jupyter notebook. So... next, we need to deploy this Voila app online so that other people can see it and interact with it too.

A couple of steps need to be completed before we deploy our Voila app on Heroku.

The first step to deploy our Voila app on Heroku is to create three files that Heroku requires. The three required files are:

The runtime.txt file specifies the version of Python we want Heroku to use. Create a new file called runtime.txt. Inside the file, just one line of text is needed. Note the lowercase python and the dash -.

The last required file for our Heroku deployment is a Procfile. This file includes the instructions for Heroku to deploy our Voila app. Create a new file named Procfile (no extension) and include the text below:

Next, we'll use the Heroku command-line interface (CLI) to deploy our app.

After the Heroku CLI is installed, a couple more steps are needed before we can deploy our Voila app online.

I'm using Windows 10. And because we need to use WSL to use the Heroku CLI, we have to move the whole project into the proper WSL folder. You could move it over manually using the Windows file browser, but the way I did it was to save the project on GitHub.com and then pull the project down from GitHub.com in WSL using git.

Log into GitHub.com and create a new repo. I always add a readme, .gitignore, and a license. 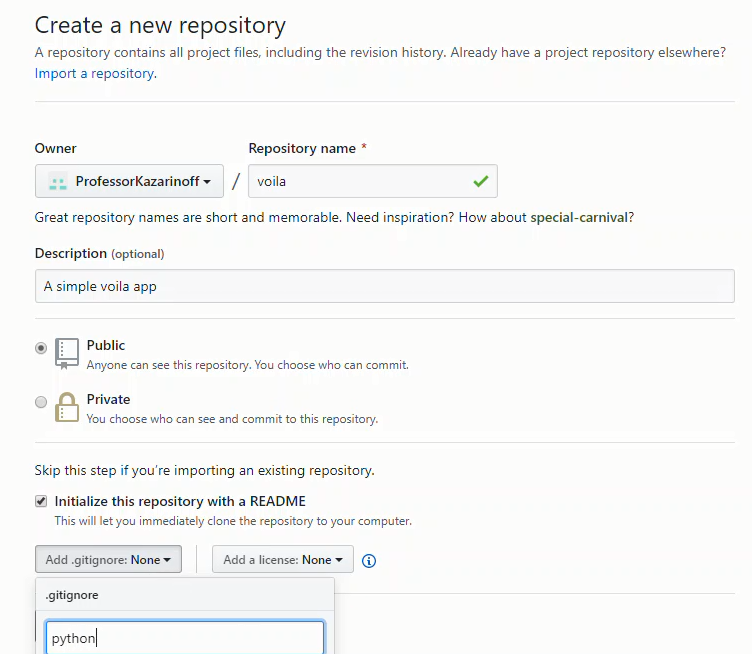 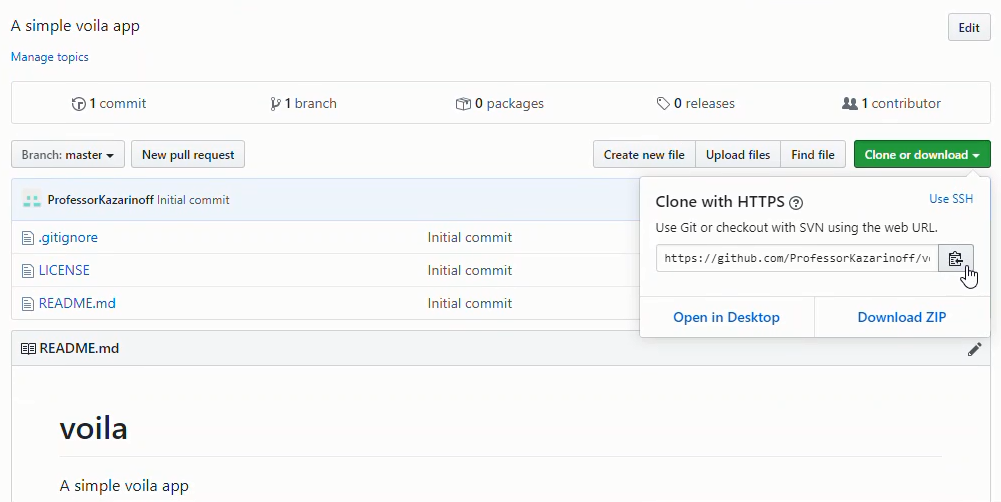 Make sure to copy the GitHub URL from the repo to make the next step easier.

Next, back on your local machine, move into the main project directory that contains the app.ipynb file. Use the commands below to create a local git repo and add the newly created GitHub.com repo as a remote. Make sure to change <username> and <reponame> corresponding to you and your project. Add all the files in the directory, commit and push up to Github.

Pull the Repo down into WSL

Now that the repo is up on GitHub.com, we can pull it down into WSL where the Heroku CLI is installed. Back in the Windows Subsystem for Linux terminal, type the following commands. Make sure to change <username> and <reponame> corresponding to you and your project.

After you pull the repo down from GitHub, the following files should be present.

Now we can push our project up to Heroku.

After our files are pushed to GitHub, we are almost done. All that's left is to push the files to Heroku and view our live web app. Use the heroku create command to create a new Heroku instance.hergit

The last thing to do is to push the changes to Heroku to publish our app.

The first time the command is run, it will take a little time for the web app to be deployed.

You can view the web app running with the following Heroku CLI command:

A web browser window should pop up and you should be able to see your web app running!

When the slider is moved, you will be able to see the plot change. The web address in the address bar can be shared with colleagues and friends.