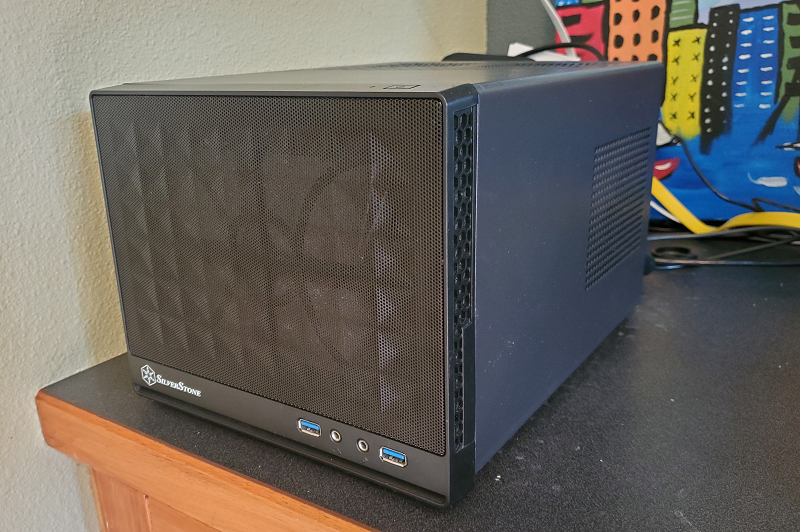 In this post, I am going to describe my PC build. This is the computer that I use for a lot of programming work as well as some live streams. The computer I built runs Linux (Ubuntu 20.04).

Why am I building a new Linux PC?

I use a couple of different computers to write this blog, write my book, and work on Python projects. Below is a partial list:

The computer that is on the fritz right now is the Linux desktop in my home office. I use this computer for writing, editing, and general Python programming. In particular, I use the Linux desktop to build software, such as building custom MicroPython firmware or building Python from source. It is useful to have a Linux system for these sorts of tasks. I have also streamed from this Linux desktop PC as it is the only PC in the house that is connected using hard-wired ethernet.

Below is a table of the parts used in the PC build. Please note that the links below are Amazon Affiliate links. If you purchase one of these items, I receive a small commission. There is no additional cost to you.

The following is an overview of each component.

The AMD Ryzen 5 2400G is an integrated CPU and GPU in one package (called an APU). I like this processor for the price, the integrated GPU, thread count, and speed. My old processor was a couple of generations old Intel Core i3 that only had two cores. The Ryzen 5 2400G is a nice step up. I chose a Ryzen 5 APU because I did not want to buy a stand-alone graphics card. This Linux PC will not be used for gaming or heavy video editing, so I don't need a lot of graphics power. What I do want is a simple build (fewer components), reasonably fast, and low cost. The Ryzen 5 APU fits these requirements nicely. I will only need one CPU cooler and one CPU power supply cable to hook the processor up to the motherboard. Fewer fans, less cable management, fewer components in a small case. I think the Ryzen 5 2400G is a win.

I picked the Crucial P1 1TB M.2 NVMe SSD for this Linux PC build. The SSD was a component I had trouble deciding on. My old system had a 60GB SSD and a 1TB spinning rust hard drive. This was a cheap way to equip the system. The problem was the system had two SATA data cables, and two SATA power cables, plus two drives were mounted in the case.

I want to keep this build simple and clutter-free. M.2 drives plug directly into the motherboard and do not require any cables. The Crucial P1 drive I selected is 80 mm long, which is the most common M.2 length. The MSI motherboard I picked has one M.2 slot on the back that the drive plugs into. I choose 1GB of capacity.

I just feel like you always need more storage.

The old system started out with only a 60GB SSD about 8 years ago. Then I added a 1TB spinning hard disk because I ran out of storage space. I want this PC build to last at least 5 years, so I splurged on extra SSD capacity. I also went with a drive that runs the super fast NMV3e PCIe communication standard. An NVMe SSD drive probably won't have any practical performance benefits compared to a SATA SSD for the things I use the new PC for. I guess I just like to know that I have fast storage. Plus, long boot times bug me.

I choose 16 GB of DDR4 RAM for my new system. The Corsair Vengeance DDR4 3000 MHz kit I bought includes 2 x 8 GB DIMMs. I don't know if my system will be able to take advantage of the 3000 MHz maximum clock speed. It's simply 16 GB of standard DDR4 memory.

The power supply I went with this the Corsair CX Series 450 Watt 80 Plus Bronze Semi-Modular Power Supply.

For this build, I am only going to need a 24-pin cable for the motherboard power and supplemental CPU power. The power supply I bought is semi-modular which means some of the cables are permanently attached and some of the cables are removable. The cables I need for the build are cables that are permanently attached. I don't need any of the detachable cables. This means that I save a little money compared to a fully modular power supply (all detachable cables), but still get the benefits of as few cables as possible.

I put all the components inside the Silverstone SG13B-V2 Mini ITX case. This case accepts mini ITX motherboards and can accommodate standard ATX power supplies (as well as smaller SFX power supplies). It isn't fancy, but it is inexpensive and gets the job done.

I bought a fan for the SilverStone case because it doesn't come with one. I mounted the fan in the front of the case. One thing I think I would do differently is to buy a 120 mm fan (which is a more common size), rather than the larger 140 mmm fan I bought (which is a less common size). The Silverstone case fits a 120 mm fan just fine and the 140 mm fan mount only has three screw locations.

That's all the parts. Below is a description of the build and installation process.

I built the PC in a couple of steps. First I built the PC on top of the motherboard box outside of the case to make sure all the components worked together.

Mount the CPU on the motherboard

Mount the RAM on the motherboard

The Ryzen 5 2400G CPU comes with a CPU cooler included in the box. The included cooler has thermal paste pre-applied, so no thermal paste needs to be added to the top of the processor before the cooler is mounted. There are two plastic brackets, one on each side of the processor that need to be removed from the motherboard before the CPU cooler is attached. When the plastic brackets come off, the plate on the back of the motherboard falls off. I've heard you can hold the plate on the back of the motherboard with painter's tape. I just had to re-align the metal backplate after I took the plastic brackets off.

I put the cooler on top of the processor and just seated the screws before I tightened it down. I used a cross pattern to tighten each screw about a turn at a time until the cooler was screwed down tight.

Next, I flipped the motherboard over and attached the M.2 SSD. The baggie of screw that came with the motherboard contained a tiny M.2 standoff and a tiny M.2 screw. The standoff goes "below" the M.2 drive and the little screw goes "above" the M.2 drive. I slid the drive into the M.2 slot at about a 30-degree angle, then pushed it down till hit was horizontal and tightened down the end of the M.2 SSD to the standoff with the tiny screw.

All these steps were accomplished outside the case.

After the system was fully assembled, I plugged a monitor into the HDMI port and plugged a mouse and keyboard into USB ports. I also plugged in an ethernet cable. I could use the motherboard's onboard WiFi, but the wired ethernet is faster and won't require any setup. I started the system for the first time by shorting the POWER pins on the motherboard with a screwdriver. After the power turned on, I hit the DELETE key rapidly to bring up the motherboard BIOS.

I downloaded the latest firmware for my motherboard from the MSI website. The download from MSI was a zip file, and I unzipped it onto a USB thumb drive. Within the motherboard BIOS, there is the option to update the BIOS firmware. I selected that option and my USB thumb drive that contained the firmware file. Then the system re-started and I went into the BIOS again.

Check the system specs in the BIOS

Next, I checked my new system's specs in the BIOS. I wanted to make sure the CPU and SSD were recognized. I didn't overclock the CPU or the RAM. I would like to see if the XMP profile for the RAM will run on my setup. For the first start-up, I left the RAM at stock speed.

When I turned the power back on, I pushed F11 over and over to bring up the boot menu. I selected the USB thumb drive with the Linux .iso image on it and started the system for the first time.

The Ubuntu installer takes a while to complete and downloads a bunch of stuff during the installation. The total install time was around 20 minutes.

After Ubuntu was set up, I tried the new system out. It worked great! Firefox opens quickly and YouTube videos stream no problem. I also entered those standard Linux command-line update commands:

Put the system in the case

I love the fact the system only contains one fan and two power cables. The inside of the case is clean and uncluttered. I initially messed up how I hooked up the power, reset buttons to the motherboard header. When I first pushed the power button on the case, nothing happened. It turned out I just messed up the way these leads were supposed to be connected.

In this post, I reviewed how I built my Linux Desktop PC from individual components. The build was relatively free of hiccups. The hardest part was removing the hard drive caddy in the case so that the CPU cooler would fit. I do have some upgrades in mind for this system... A fancier case would be nice. If I end up overclocking the system, a new CPU cooler might be in order. And there is always the possibility to add a discrete graphics card, more RAM, and a more powerful CPU.